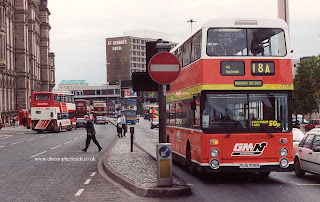 At one time everything had it's place and would not have dreamt of seeing Manchester buses working in Liverpool and visa-verse. But such was the spirit of competition brought on by Deregulation operators were more or less forced to to branch out or fight back. Naturally usually it cost everyone concerned far more money than it made but it certainly gave us enthusiasts something to talk about. Greater Manchester buses in Liverpool originally ran from Wigan about half way between the two cities but as you can see they got their own small fleet with a local LL garage code. As you can see by the buses in the background as Northern Counties bodied Atlantean RJA 706R No.7706 heads out of the city competition in the Beatles city was rife in the Nineties.
Posted by christopher at 11:59