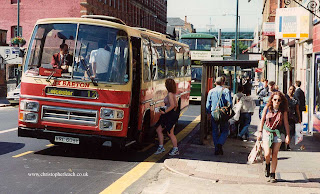 Barton of Chilwell was one of the great names in the bus world with it's fascinating mix of new, secondhand buses and a colourful individualism that typified the confident innovative Independent. In the Seventies it broke new ground when it's used the government's new bus grant to renew the whole fleet with coach bodied Leylands and Bedfords. Despite the loss of interest caused Barton remained a favourite with enthusiasts and one of the last of many Leopards delivered No.1609 VRC 609Y picks up by Nottingham Railway Station on it's way to Leicester. By this time the company had sold it's bus interests to the local Wellgate Group who ran it alongside the local former BET and NBC company Trent and both names still survive to this day.
Posted by christopher at 08:26