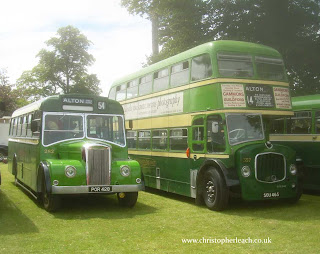 Even when I was a youngster people thought I was a bit mad liking buses, but it was an exciting world where everywhere one went the buses were not just different colours but also often very different. It has taken many years to fully appreciate the smallish BET Group fleet of Aldershot and District as it was so 'conservative' and old fashioned without an Atlantean or even a modern looking bus in sight. I remember the Dennis Lolines well as they were built locally at Guildford but also on parade here at Alton was something I had never seen before. Indeed not only was this curious Strachan bodied Dennis Falcon P5 unique to A&D most if not all eight operated from here at Alton. No. 282 POR 428 built in 1954 was similar in concept to the lightweight low capacity London Transport 'Guy Special'  GS bus where the operator needed a small 'one person operation'  bus to go down the country lanes.
Posted by christopher at 09:20