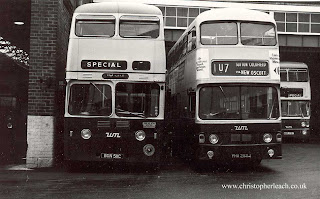 On West Midlands Fleetlines it was easy to tell a similar early Park Royal body from a MCW body sideways-on by the the more rounded rear dome but it was not quite so easy directly from the front like this. A local MCW product though can be seen behind the former Midland red Alexander bodied bus 6282 of 1971 standing alongside 1965 Park Royal 3511 BON 511C. This final batch of 33 with dual-entrances nearly all paseed to the PTE having been allocated in the area.
Posted by christopher at 16:19

Anonymous said...
This comment has been removed by a blog administrator.
5 December 2010 at 14:17