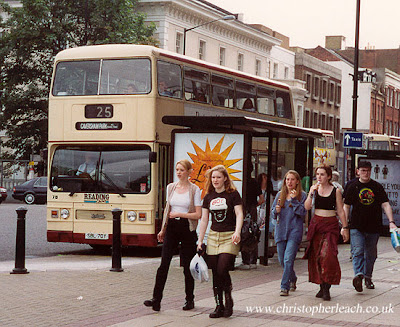 The double-deck counterpart to the Leyland National called the Titan was not a huge success due to production delays and it's cost which was a shame really as it was a lovely sturdy bus. Although some of the PTE's like Manchester and West Midlands took trial batches it was only London who took it seriously enough to build up a large fleet ordering 1130 examples. However there was one Muncipal further up the Thames which always bought something different to the others and that was Reading which like London Transport took a number along with the MCW Metrobus which proved much more popular with the Area PTE's. Two initial T-Reg buses were followed by this batch of ten Y's Nos.70-79. Also in this view doing a Saturday Afternoon Promanade various local girls give us an impromptu display of Ninties Fashion.
Posted by christopher at 09:09