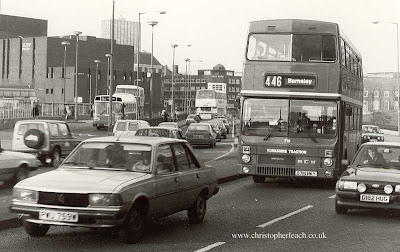 By 1986 many of the restrictions imposed on it's fleets by the National Bus Company had been relaxed as the organisation focused much more on making them attractive for Privitsation, or as with this former BET Company Re-Privitisation. So instead of it's more usual diet of ECW bodied Leyland Olympians the Barnsley based Yorkshire Traction was able to take delivery of sixteen MCW Metrobuses instead. I believe they were built to a reduced height and yes No.716 battling on it's way out of Leeds in the traffic when still quite new does look more squat and less lofty than normal. I haven't bothered too much with my favourite photographs tag as I've been posting a lot of colour but generally it's these more atmospheric monochrome shots that catch the magic of what bus photography is about. For me it's about the excitement of the evening rush-hour with it's noise, movement, people and traffic.
Posted by christopher at 10:52