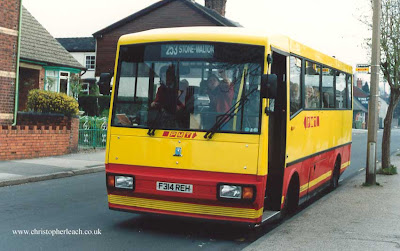 With Privitisation as well as trying to expand and forge new territories PMT made the most of it's spare work's capicity and engineering skills already deployed bodying those so-called Transit type bread van mini-buses and moved into bigger things like Mercedes midis. But it's most interesting project was to build very presentable but rather homemade looking bodywork on a batch of about eight Leyland Swifts for it's own fleet. One of them 314, probably in 1989 was seen working a town service in Stone which is five miles north of Stafford.
Posted by christopher at 06:05