Barbie might not be getting many Valentines, but she's doing well for an old girl 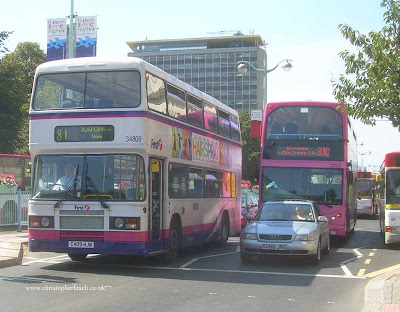 I have to confess I don't hate the First Group's Barbie Livery when it's clean and properly maintained, but a lot of my enthusiasm stems from the fact that at last the company saw sense and did away with that dreadful dreary Ugly Sister Barbie Two. I read the article posted recently on the interesting and informative website of Plymouth Transit congratulating First on the great improvement in the state of it's buses in the city. I have to say I agree as they looked smart at least in the sunshine when I went there last summer, and another nice touch was how a broad band of blue has been positioned beneath the upper deck windows on double-deckers, something that was abandoned by many operators in the early Sixties when lazy spray painting led to economies in detail and finish. The older buses of Liverpool and Salford and of course the Bristol Lodekka never looked quite right again when that tradition was binned along with the paint brush. Another good thing about the First double-deckers at Plymouth from the enthusiasts point of view at least is that many of them are old friends who have gathered there from all parts of the country like old Hippies travelling to the West Country for a Grateful Dead Concert. But I jest too much for as Kenny Everet would have said on his radio show sounding like a blast from the past those Leyland Olympians big Gardner Engines might be heavy metal but they sound rather more mellow and evocative like say The Family or flute playing Jethro Tull.
I hear the weather is good in Plymouth, why not visit plymothiantransit
Posted by christopher at 11:20