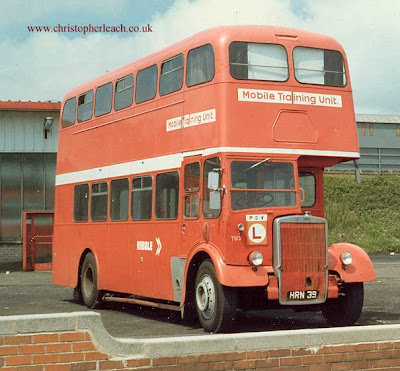 Not looking too bad in NBC poppy-red and by this time a training vehicle, TU3 was formerly No.1399 in the Ribble fleet. It stands outside Aintree Garage next door to Littlewoods Pools and directly opposite Aintree Racecourse across the dual-carriageway. It was one of three Ribble garages in the Liverpool area and held ninety of the 200-plus allocated by the company to the city. During the Sixties most of these buses were full-fronted Leyland PD3's or PD2's like this plain MCW bodied example. Aintree differed from the other two sheds though as forty of it's fleet were coaches and there were a couple of Royal Tiger single-deckers too and also the only Atlanteans, two of them used on the long route to Preston. Anyway that was the local fleet in August 1963, a year or so before I tried to walk around this garage notebook in hand spotting numbers. Amazingly it was the only one in the whole city where I was turned away as even they would let you just wander around the Corporation's Edge Lane Works. Not that it mattered much as the gaffer's office was in the middle and by the time I had reached it I had recorded just about everything in there including two rows of Harrington Cavalier Leyland Leopard coaches parked up for the winter. To be honest I'm not sure when I took this but 1980 sounds about right and as you can see if you look through the frosted glass windows behind that single-deckers had properly arrived mainly in the form of the Bristol RE. With this posting I have decided to add a new tag for special and service vehicles.
Posted by christopher at 11:08