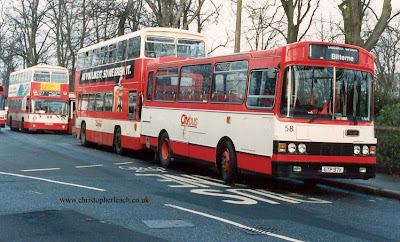 In 1985 not only were all it's buses double-deckers all but five of them in the smart Southampton City Transport fleet were Leyland Atlanteans, but by the end of the Decade not only had it renamed itself to Citybus the fleet contained some single-deck variety in the shape of new Leyland Lynx buses together with some second-hand Leyland Nationals. But maybe the most interesting of these single-deckers was this unusual Dennis Lancet with Wadham Stringer bodywork that had not travelled very far starting life as part of a batch of three at Portsmouth just along the coast. I don't know whether Southampton took all three or just this, numerically the last one ex-No.97.
Posted by christopher at 08:03