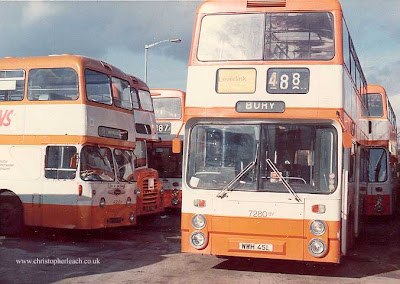 With a backdrop of threatening skies I caught these orange Greater Manchester Transport buses resting over the weekend at the former Bury Cororation depot on the Rochale Road in about 1980. As well as three 'Manchester' Standards with Northern Counties bodywork, in this case Daimler Fleetlines, there was also another older one of 1965 the former No.133 which came with the Bury fleet, and also bodied by East Lancs was a Leyland Titan trainer bus probably formerly Ramsbottom U.D.C. No.5 TTD 879D of 1966.
Posted by christopher at 05:22