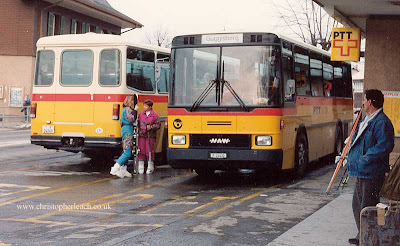 I have to say Schwarzenburg, a small town and local ski-resort wasn't the most exciting place to have to spend two hours in the cold waiting for the train back to Bern that Saturday Afternoon almost exactly fifteen years ago on 27th Febuary 1993. Indeed it didn't take many minutes either to see the four PTT Swiss post buses based here. As well as this 1981 Hess bodied Saurer RH, until 1989-90 there had also been three Saurer DUK's here too, Nos P24605/11/19 dating from 1970-1. But they were replaced by brand new Mercedes based NAW BH4-23 buses with consecative numbers including this one the first P24430 . Later in the decade the local Regie fleet was transferred to a local Post Bus contractor (PAH) so I'm glad I didn't miss this one unlike Sierre, Fluelen and the other small garages that went over the years. Of much greater interest though was on the journey back great views of a huge scrapyard in a quarry containing a good number of old buses spoiling my sleep that night!
Posted by christopher at 09:18