The Culture Volture: Moi? What Culture! 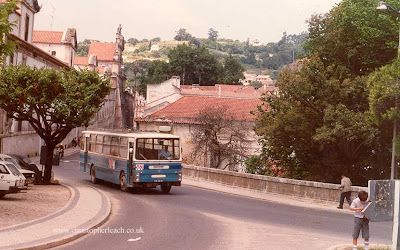 ......You must be kidding.
When I went on my Cosmos Coach Sightseeing Tour of Portugal in 1986 Santi our tour guide didn't like having me in the group for every time we stopped instead of following the rest of the obedient group I would head off in the oppoisite direction in search of those much more interesting buses. So I didn't know where I was half of the time and now have to do a little research to guess some of these more out of the way locations, but you have to admit I took a lot of worthwhile pictures and no doubt the dusty old ruins and monuments are still there today for the tourists to gawp at but those lovely old buses are not. Of course there were historic places where we stopped and where there were no buses and then I had to submit my brain to some culture but with it's busy road out of the town Alcobaca and it's Monestry was not one of them. This was RN territory and still wearing the blue colours of it's previous owner was this AEC Reliance. I thought these export models were all Regals but no I was wrong, they are the Reliance. I can't tell you the number of this one but the number plate contains C- 2-4-, maybe C- 24 41. Of course being both educated and a working artist I am no philistine but I don't feel the need to have to go inside and see everything, being there is enough to capture the magic of the past.
Posted by christopher at 06:06

Obviously your tour guide was taking you to the historical sites of Leiria, Alcobaça or Tomar, because that is where you could find a bus like this. The blue livery is from RN predecessor Claras Transportes.
To determine the fleet number we need more dpi's in the scan.

Thanks for the information about the area and the bus. I did do a huge 1200dpi scan of the front of the bus but as it was some distance away and moving it was not possible to determine any more information I'm afraid.

Christopher, can we have your photos with more definition? Because I'd like to make them in paper. Please...

Pedro, to make them suitable to print off they would need very high resolution values and I am trying to keep them down on this blog as I have a lot more images to publish, a huge amount, and the black and white are even more consuming of pixels. I appreciate your enthusiasm but you are not the only person who makes these requests for sharper pictures. Rather than my saying yes or no, I think I would be agreeable to emailing the occasional image in a larger size as I have done already but I cannot send everyone everything so it will just have to be when you see something really really special that means a lot to you. That way I might be able to keep more than just one of you happy. It's a pity you are not a publisher. That's another problem as at the moment my images are fine for the web but I don't want people stealing them to use elsewhere without so much as a thank you. I'm afraid not everyone is as nice as we are and it's so easy to get ripped off and in the not too distant future I hope some publisher will come along and if they are not properly protected something potentially good could be made not so good!