Hannibal crossed the Alps once; Post Buses do it every day 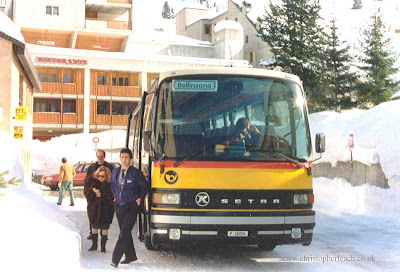 Part of the romance of Switzerland's Alpine Post Bus Network has always been that whatever the weather without qualms they make their way up those often perilous mountain roads and back. On certain long routes there was an added almost heroic element as even in Summer it was quite a treck from the likes of St.Moritz to Lugano. When the weather permits that goes just once a day in each direction but a much busier route makes it's way down the high mountains from where they start near Chur where the main-line rail network ends and a narrow-gauge train or yellow Post Bus bus takes us even further over the top to Bellinzona in Ticino where not only can one once more find proper trains there is a more balmy Southern European Climate. By the Ninties all that schoolboy romance had gone as more comfortable but mundane Post Autos no longer had to negociate the often rock-strewn narrow winding mountain roads as all the driver had to do was switch his headlights on as they sped right through them in tunnels on a modern super highway. However there were still little subtle reminders of the good old days when there was less hurry and proper Post Buses owned these roads like the legendry bonneted Saurers and equally Swiss FBW Heifisch Alpenwagens of my schooldays. Yes even the much bigger modern vehicles break off their effortless progress turning off the main highway to visit small communities that on the surface at least have hardly changed in Generations. I made this journey south a number of times on the PTT's front-line coaches of the time the Setra Kassbohrer S215 HM like Chur's P26004 and as we paused for a break half-way at the top of the world in San Bermadino surrounded by dazzling white snow blue skies and sunshine many of the passengers staggered off just wanting to fill their lungs with poisonous cigarette smoke. And some people think I'm crazy liking my buses.
Posted by christopher at 07:47