What does Lausanne have in common with Walsall? 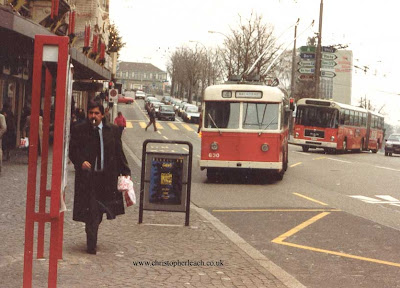 Under it's innovative or some might even say eccentric General Manager Edgley Cox, the rather bright and shocking almost electric-blue painted buses and trolleybuses of Walsall Corporation were a fantastic mix of the old, the new, and the secondhand. Added to this there were in-house rebuilds and the expertimentation of strange concepts like a record breaking jumbo-sized Fleetline whilst just a few years earlier the Corporation had ditched the front-entrance concept altogether and ordered these extra short 26ft long Daimlers with the entrance behind the driver and no front overhang to speak of looking a bit like today's Optare Vario or those futuristic ugly round-fronted-snake-bus- trains they are operating in York which remind me of something from the adventures of Dan Dare. Most Swiss fleets seemed rather conservative in comparison and the larger concerns seemed to standardise on well-tried Swiss products but Lausanne seemed to have everything. Here are two good examples as not only did the concern prefer trailors they also ran oddities like a few impressive imported German bendibuses from MAN, and at the other end of the age scale in December 1988 was No.630 one of the oldest members of the fleet, an ancient looking trolleybus that might even have started life with somewhere like Zurich as TL was not adverse to buying secondhand either.
Posted by christopher at 02:49

Thank you, I knew some of these old TL buses came from Zurich.