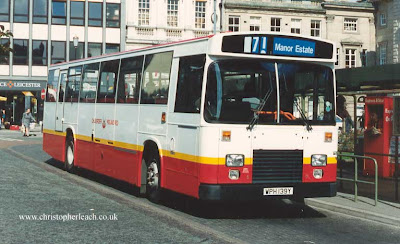 The bus operator called Drawline who bought out former NBC companies like London and Country, and the Merseyside wing of Ribble (North Western) also owned East Lancashire Coachbuilders of Blackburn. So not surprisingly many new buses carried this bodywork especially double-deckers, but a number of redundant mid-life local express coaches from the London area were rebodied as buses thus making good economic sense and at the same time keeping the still struggling workers in the Lancashire factory busy too. These buses were delivered to Midland Red North and most of them saw service in Stafford at some time or other and No.1719 was seen in the town shortly after re-entering service in 1989 and looking almost surreal like something washed in a magic washing powder when compared to the predictable dowdy poppy-red Leyland Nationals that went before.
Posted by christopher at 15:59