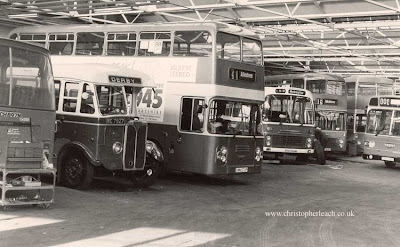 Trent is a survivor from the BET days when operators were given proper and meaningful names, indeed most appropriately too for as well as serving the Trent Valley from Burton almost to Newark it's main garage is still situated in Derby close to the centre beside the river in what were once the water meadows. Even during the in many ways rather mundane NBC days this operator with it's well presented fleet always managed to seem slightly superior which perpeptuated the individualistic aura of it's red and cream BET Days. When this interesting photo was taken of the sunlit workshops towards the end of the Eighties the operator had already been privitised as can be witnessed by the National1 wearing the new ayres-red and silver livery. As well as an Atlantean also carrying the new livery were a pair of Bristol RELH6L coaches now fitted for 'OPO' also carrying ECW bodywork as was a Bristol VR further inside. Probably pride of the fleet was A417 the preserved 1939 BMMO 'SON' whose Willowbrook body had been rebuilt in 1979. Last but not least, although Trent might have seemed rather a proud company it was not too snobby to buy the odd secondhand 'bargain basement' London Transport DMS type Daimler Fleetline to help it through what were to become challenging times as the Free-Enterprise spirit of Deregulation hotted up.
Posted by christopher at 03:33