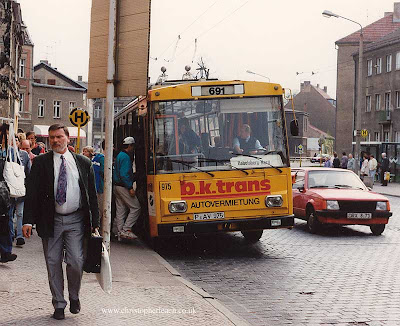 Some years ago there used to be a tiny smattering trolleybus routes in East Berlin and even one operated in the West till 1965. However they could still be found working within the ' Berlin S-Bahn Zone' just over the wall in the East at Babelsberg on the line to Potsdam in the Havel District, but with the many revisions that came with Reunification sadly the functional but not unattractive Skoda trolleybuses on the 691 route had to go. I took this picture in April 1992 and went looking for them again last year not realising how long ago it actually was, and so now I guess it's hardly surprising they had long gone. Babelberg is most famous for it's film studios being the traditional heart of the German Film Industry.
Posted by christopher at 07:51