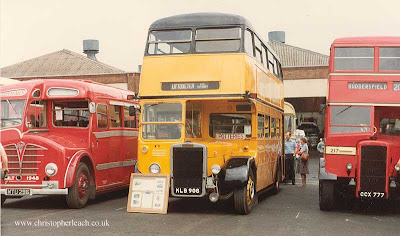 The local Potteries preservation group (POTS) have used a number of interesting locations for it's bus rallies over the years including most appropriately when it was still in use with PMT the large forecourt yard in front of it's large Clough Street Garage in Hanley. When I do photography for me it's more or less a fifty-fifty split between getting quality record shots and more creative photography. So whereas I tend to frown a bit on all those buses preserved in aspic and hold back a bit I do like getting a feel of the event. And yes I really do like this view of a former Stevenson's London Transport bus dating from long before this small thirty-five vehicle Spath and Burton based concern expanded and added loads of those slightly ugly former DMS Daimler Fleetline buses. In the good old days not only did Stevenson's have magnificent buses like former RTW 178 it operated RTL Leylands and the AEC RT too. Meanwhile also in Uttoxeter Elkse's Biscuits had a couple of lowbridge RLH buese. But when it comes to modernity the former RTW and utility bodied Daimler of Huddersfield Joint Omnibus Daimler look ancient when compared to the stylish and modern looking Foden coach, a former company demonstrator and believe it or not dating from 1948. I have certain sayings and one of them might be that I'd much rather be run over by a big Foden than say by a Dodge, a Ford Cargo or an LDV. Not that I want to go just yet, but I'm sure some London enthusiasts will not approve of some cheeky Northerner rubbishing it's buses. I did like the Routemaster in it's pristine youth and when still powered by AEC or Leyland but probably on balance the RTW is still my favourite LT bus.
Posted by christopher at 06:00