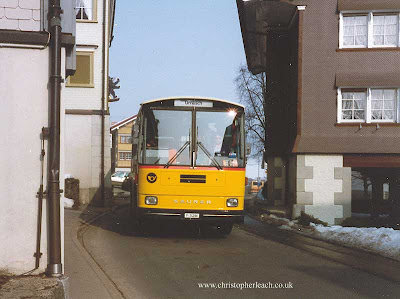 Post Buses: When you've seen them all take a photo of the rest! No it's not just gibberish because somehow when you've travelled miles and miles seeking them out there is always just one more just over the mountain.
It might still say so in the tourist guides but yellow Swiss Post Buses no longer neccessarily operate in the mountains and this applies too to famous routes like the one from the Bahnhof at Urnasch to Schwagalp. No doubt in the same way as the yellow buses met the train for fifty-years the new operator will too and Switzerland is so beautiful hardly any tourist will even notice. Not that it matters too much to me either as the Saurer RH's like the FBW's before them have all gone. When the last Saurer RH class bus looking very much like this was delivered to Sion in 1986 total deliveries since 1978 made up almost half of the 600 Post Office owned P-Reg fleet. But even by the time I started looking for them in 1989 about five examples had already been sold off so I would never have managed to see them anyway and by 1996 another five had also moved on evading me. So by the time P24288, one of two buses at Urnasch rounded the corner it was one of less than ten more from the original hundreds that I had managed to see and being the last of the great iconic Post Buses too each one of these great buses in principal deserved a little photo. The similar looking RH's came in different sizes including this the most numerous narrower type RH 525-23 Alpine Bus and this 1982 example bore bodywork by Tuscher.
Posted by christopher at 16:29