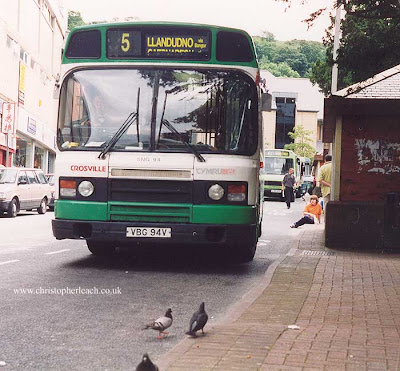 Even though the English part of Crosville in Cheshire quickly became part of PMT after it was split in two and sold, the wilder more romantic and more rural Welsh part seemed to keep that bit more of the traditional character alive complete with a strange green and white livery that seemed horrid at first but slowly grew on you. Both PMT and Crosville Cymru kep't the old numbering system going for some years and this secondhand former Merseyside National 2 seen one Saturday in1999 in Bangor shows that it is a Single deck-National-Gardner SNL 94
Posted by christopher at 12:46