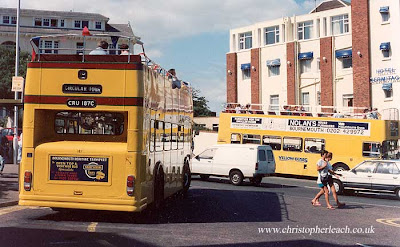 Bournemouth had been operating open-top Daimler Fleetlines since 1965 when ten examples arrived with removable roofs for the summer. The first batch with Metro-Cammell bodies fitted with Alexander looking front ends ran till 1976 when they were replaced by similar buses but this time bodied by Alexander itself. So even though in 1992 Bournemouth No.187 was still working the town's open-top services it was in fact no longer owned by Yellow Buses but a private heritage company who had perfectly restored it to it's striking original yellow and maroon livery with green lining out. This can be compared to the then current Bournemouth yellow and light blue look on the newer generation of bus in the background. One of the nicest things I remember about Nos 180-189 was that they bore the name of English Counties and No.183 bore my home of Staffordshire and 180 my families county of Lancashire.
Posted by christopher at 09:33