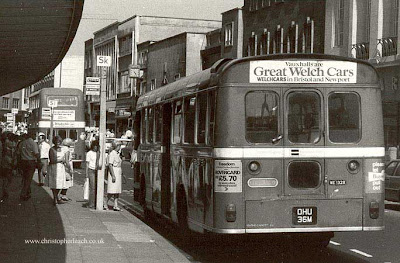 The Bristol Omnibus Company built up a large fleet of over 300 Brisol Lodekka FLF's in the Sixties powered by Bristol, Gardner and Leyland engines but as elsewhere the availability of 36ft long single-deckers suitable for 'OPO' became the norm till the double-decker made a come-back in the Seventies once the Trade Unions had agreed to work them without a conductor too. Bristol RE single-deckers were powered by Leyland or Gardner but you didn't need to ask which was which as they sounded quite different with the loud O680 booming away to the point where it was difficult to talk at the back whilst the Gardner was more mellow and tuneful but still quite loud. There was always a very hollow untypically lightweight feel to these ECW bodied buses like this one which as usual in the Bristol fleet carried the Leyland Engine whose generous decibels and exhaust cackle could be enjoyed by nearby pedestrians as well. Even though I am something of a Leyland Man I'm sure the Leyland product must have been slightly cheaper and more readily available for the legendary trouble-free fuel efficient and slightly quieter Gardner would have been the more logical choice for the more discerning operator. Either way they were successful and popular buses and the Leyland examples certainly dispelled the myth that all Bristols were slow heavy old fashioned looking plodders.
Posted by christopher at 16:37