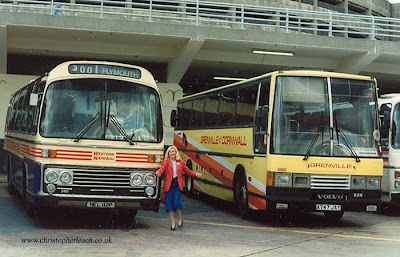 Yes I've now posted 500 transport images on this blog and I wanted to choose something a bit special but in the end I chose this one as it has been bestowed with a bit of glamour provided by one of the Rapide Girls. I don't think they bother with them any more passengers have to just put up with the sometimes miserable bad-tempered driver. Competition did a lot for coach travel! In about 1996 Western National still had a good number of once white National Express liveried Leyland Leopard Plaxton Supreme coaches including cascaded examples like No.2401 NEL 112P which started life with NBC Hants and Dorset before it's coach fleet became Shamrock and Rambler. Alongside it at Plymouth Bretonside still in Genville of Cornwall colours is a Volvo B10M with a Duple Caribbean bodywork which by then was now also part of Western National as it's in house red fleet number plate will testify.
Posted by christopher at 07:45