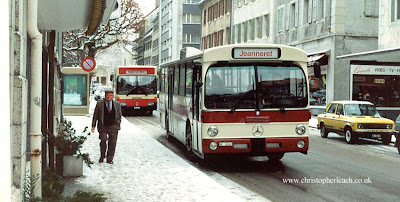 One gets used to small Swiss towns being quiet but I spent a couple of hours in Le Locle close to the French border and it was deadly. Here two generations of Mercedes Benz buses could be seen waiting for their intending passengers to arrive and as you can imagine I really had to dash out of the way immediately after taking this exciting picture to avoid the mid-day stampede. My quest to find Regie Post Buses brought me here as I thought there was a garage in this little town but it was in fact at Le Cret du Locle several miles away, a small nothing-much main road village which is in fact very much closer to the large and more important town of Chaux de Fonds from whence I had just arrived. Indeed had I known, not only could I have walked there from the town boundary bus terminus in ten minutes and ridden on an FBW to boot, a different train back, a local one would have stopped right outside it for me too. So apart from one small Magirus Deutz 160 R I saw in Le Locle all I saw on that part of my journey was the top of another one of these buses and that of a Saurer RH as we hurried passed the garage beside the station. Yes even though I had given up bus spotting many years before, the fact that I needed something to keep me occupied on holiday and the sheer difficulty finding those PTT owned Regie Post Buses made it rather more worthwhile than just taking down the numbers. Just think those buses could be almost anywhere and then when you get there people don't usually understand what you are trying to say which makes finding them all that harder. I must have been mad, but I so miss my little adventures.
Posted by christopher at 13:09