Freedom to Snap: That wonderful world before the shuttered minds clicked shut. 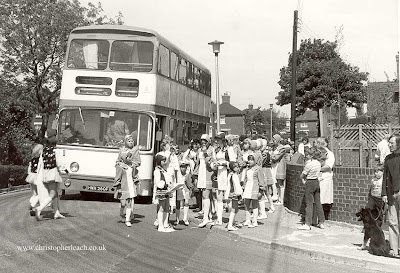 Today if one were foolhardy enough to try to take a photograph of a colourful scene like this with children in it they would probably find them self spending the afternoon sitting in a police station trying to get their point across with some hard-nosed impervious copper who has apparently never heard of anyone wanting to take photographs of buses before but who will eventually release us anyway because they know all too well that we have a home filled with nothing more sinister than a pile of Ian Allan Books, notebooks and maybe model buses. But I do believe that it is unfair that our little slightly eccentric community of enthusiasts should be marginalised and even bullied by authority when probably the worst most of us have been guilt of is perhaps a little minor trespass and dandruff. All this institutionalised killjoy paranoia is all a bit sad really because at one time all individuals were free to take valid pictures like this and we were accepted as not only having a good hobby but even doing our bit by making some sort of savable record. Now over twenty years later the young people in this photo probably with children of their own would be most interested to revisit a bit of their lost childhood, and not only that we can also see Uncle Jack and young John plus of course daft Jasper before he went after a cat and got run down by a bread van. Back in those less complicated times of 1982 it's Pageant Day in Mere near Longton, Stoke on Trent and a small number of interesting old buses are arriving from all around the area full of well-scrubbed majorettes and dancing troops. The bus is a still attractive looking East Lancs bodied Leyland Atlantean, a vehicle which started life with Bolton Corporation before it was absorbed into Great Manchester and painted orange and cream..
Posted by christopher at 09:41