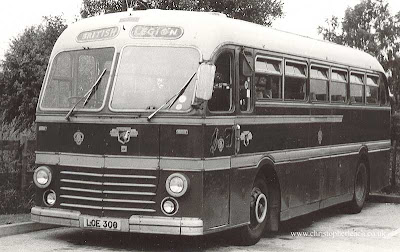 South Notts of Gotham had two of these noble beasts immortalised by the Meccano Company of Liverpool and I still have about five of the Dinky one's in a box in the bedroom cupboard. When I visited the premises of South Notts in about 1980 one at least had escaped the usual fate of just being parked up and left to rust away in the yard as it had passed to the local British Legeon and was seen elsewhere in the village. Indeed LOE 300, bought from Jackson of Castle Bromwich in 1957 looks in this view a bit like a proud old soldior too sticking out it's chest and showing off it's medals gained in it's youth long ago.
Posted by christopher at 13:34