Those we have loved: Those Stagecoach Stripes! 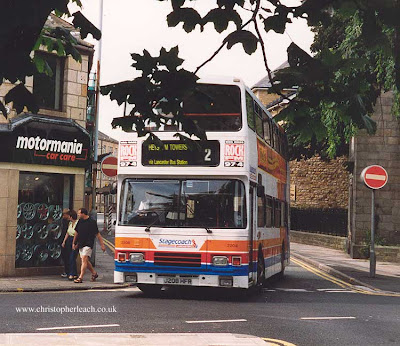 Stagecoach Stripes: Remember at the time how we loathed it but now times have moved on we've come to view it with a certain affection; anyway I certainly do. My sentiment is helped by having forgotten how this pushy company used it's size and financial might to bully smaller rivals into submission as happened here when it quashed Lancaster City Transport because it wanted it's traffic and modern garage. I must say though that it took Stagecoach a long time to sley it's white elephant and replace it's back-of-a-matchbox livery with something so much more eye-catching and vital. Surprisingly the ECW Bristol VR looked quite reasonable in Stagecoach Stripes but somehow Alexander bodies like the R-Type seen here on an Leyland Olympian chassis, the also ubiquitous P-Series and little Dash single-deckers too not only looked smashing they summed up the company at that time in the Nineties and I see it's spread out well managed and always clean looking fleet almost like another 'BET' Ribble or Southdown.
Posted by christopher at 08:40