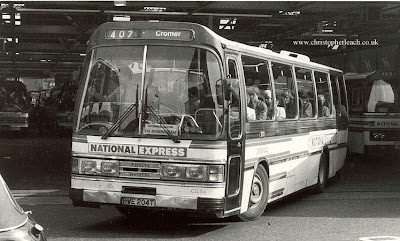 I used to like to be in Birmingham for the 12.30 lunchtime departure from Digbeth Coach Station as on mass hordes of National Express Leyland Leopard, Tigers, and even Royal Tiger Doyans would head off for the four corners of Great Britain. This Duple Dominant bodied Leyland Leopard belonging to Crosville might well have come from Holyhead on the westerly tip of Anglsea in Wales and was heading for Cromer near the most easterly point in Norfolk. Formely a National Travel East coach it found itself with Ribble before arriving at Crosville and I note it was at Oswestry Depot in 1986.
Posted by christopher at 10:10