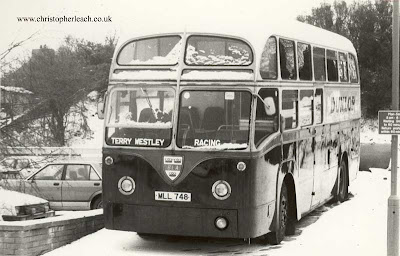 Entering Walsall from Cannock I often used to see this by then rare 1952 AEC Regal IV Observation Coach parked in it's usual spot next to the road by a roundabout on the Ring Road. It was one of sixty-five with Park Royal bodywork operated by London Transport on behalf of the airline BEA and I'm glad on this one occasion I took the time to stop to take a photograph of it in the snow. By this time in the late Seventies it had become a motor racing transporter, but had it been used by a racing team today no doubt it would have been safely stowed away somewhere out of sight, safe from the mindless vandals who would gain immense pleasure from wrecking a fine old bus like this.
Posted by christopher at 16:52