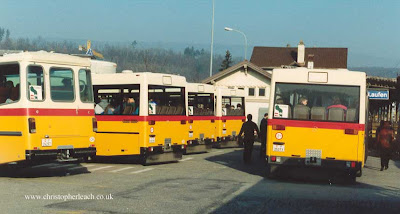 Mid-day during the school term is always the best time to see Swiss Post Buses gathered outside railway stations and Laufen in the Jura is no exception. Like most Regie Garages this one with about twenty-four buses had a fewnormal Saurer RH buses like P24297 a shorter mountain-bus but also the bigger urban three-door variety. But by the early Nineties as more of the ubiquitous Mercedes O405 and not so common NAW BH 4-23 gathered here the Saurers migrated to placed like Lugano. But this example P24297 remained here the longest and when I took this view it was the only one left, but it later ending up at Chur where the next time I saw it had suffered accident damage which might have finalised it's demise. Post Buses usually look immaculate so it's difficult to age pictures but this was probably about 1994 and I remembered this place from my school days as we passed through here stopping briefly on a school trip to Basel and Schaffhausen in 1965, though unfortunately I was sitting on the wrong side of the train to properly enjoy the spectacle. My school mates cried out "Look Post Buses" but also being towards the front of the train all I only just caught a glimpse of was a row of Saurers from the then still new 1963-5 P25507-25530 batch just waiting to be spotted. I was able to record none of them and they wonder why childhood is so difficult! Interestingly the PTT re-used it's systemised registration numbers and once more there were buses here with possibly those same numbers as before, albeit sadly more of these more mundane Mercedes O405's. All the examples here though date from Laufen's first delivery of the type in 1988-9, thirteen buses numbered P25269-25281 making up over half the allocation.
Posted by christopher at 03:14