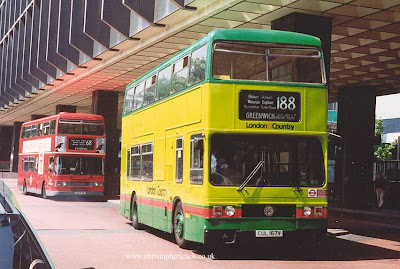 The driver of this otherwise quite smart looking Leyland Titan must have thought his change was rattling and clattering a bit more than usual, but before he arrived at Greenwich across the Thames in South London there might well have been a terrible crashing and breaking of glass as the front bulk-head windows collapse inwards. This bus was formerly T167 in the London Transport fleet whilst behind it is the less sophisticated ECW Olympian built for provincial operators with less exacting standards but which London also bought once Titan production ceased. The Titan dated from 1980 whilst the Olympian was from about 1985.
Posted by christopher at 01:57