The Original London Sightseeing Tour: Let there be sunshine 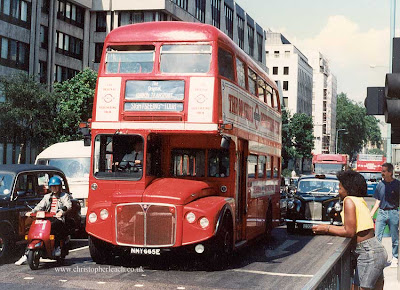 I often do my posts to reflect the weather and the mood it puts me in, but today with snow and rain outside the window and it's still only October maybe something more cheerful might not go amiss. Also I admit even though I have the views available I tend to ignore certain parts of the country like those very non-Northern buses in the London area. So as an attempt to put matters right here is a familiar enough looking London Routemaster busy at work as part of the LT coach fleet working the open-top tourist tour in the Nineties. A better look will reveal that this RMA as it was called was somewhat unusual in having a front-entrance with power-doors rather than the usual open rear platform. It must have carried quite a number of tourists in it's time as RMA 65 the final one built of the class were formerly equipped to pull luggage trailers to and from London Airport from the West London Air terminal in the Cromwell Road. I think the terminal was closed some time in the Seventies and these extra and not too elderly Routemasters were transferred to the main red fleet. Despite their lean years and comparatively easy former lives I expect because they were so non-standard by London standards trade union opposition led to them being relegated to rather unglamorous work like becoming rather scruffy driver-training buses where like with the former Greenline RMC coaches their manual-semi-automatic gears would be useful for learners. Also their short-length was unattractive to LT but as you can see the Eighties saw a boom in tourism and a few like this smartly turned out example were reborn at a time when older Routemasters were being withdrawn to show off London could still parade these fine buses at their familiar throbbing AEC-engined best.
Posted by christopher at 08:10