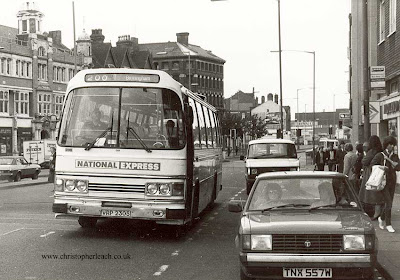 United Counties operated the 200 Service from I presume Northampton to Birmingham which terminated at the Bull Ring Bus Station rather than the operator's Digbeth Coach Station. I reckon that is because it was classified more as a local shopping coach as opposed to a long distance travel service. As you can see it did stop outside Digbeth but many years ago when Midland Red ran the Limited-Stop X96 between Northampton and Shrewsbury a distance of over ninety-miles and which took five-hours buses from either end used to meet-up inside the Coach Station where the crews going in opposite directions from Shrewsbury and Rugby used to swap over for the return journey home. From 1963 the X96 was usually entrusted to dual-purpose Leyland Leopard buses but by the Eighties even though the Midland Red livery had given over to a National Express White the vehicles used were still the same faithful Leopard like Duple Dominant bodied coach No. 230 from 1978.
Posted by christopher at 06:36