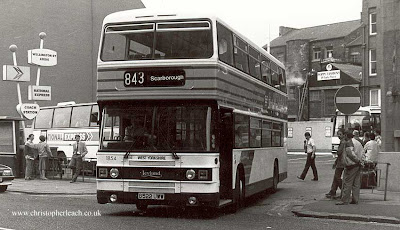 In the Eighties the National Bus Company replaced the Bristol VR and Leyland Atlantean with large numbers of the new Leyland Olympian all with ECW or fairly similar bodies by Roe. These included a good number with coach seating for longer services like the West Yorkshire examples used on the long 843 route to Scarborough. Here No.1854 is pictured leaving Leeds Vicar Street Coach Station with some rather naff very day 'Festival of Britain' style NBC signs on display. Britain had a long way to go to achieve the standards of street design enjoyed in European countries like Holland and Denmark.
Posted by christopher at 04:09

The Titan / Olympian design of bus was super-modern when it first came out, and strangely has refused to age in the way most of its contemporaries did.

Cirdan I think it was a fairly basic design with no odd looking bits too date it. A well kept one still looks good today and these in brighter liveries looked very nice indeed.