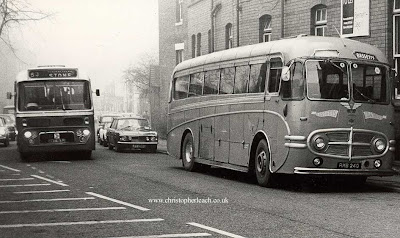 Well it was not that bad but we used to get a lot more fog than today in the Seventies. Think of Bassetts of Tittensor and one thinks of maybe Fodens the Bristol LH or the Leyland Tiger and Leopard coaches or even Bedfords. But perhaps their best known coach was this odd man out being an AEC Regal that was very similar to the London Transport RF buses being built in the early Fifties. Painted on the front of it's well rounded Plaxton bodywork was the legend 'Speedy' which suggest this AEC's heavyweight equivalent to Leyland's Royal Tiger was also something of a flyer. It was pictured in Stone just north of Stafford on a cold foggy winter's day with another fine AEC this time an Alexander Y-type bodied Reliance of Potteries creeping past in the morning rush-hour. Fortunately both RMB 240 and DVT 167J have become preservation candidates with the Regal being in the care of the museum at Wythall near Redditch.
Posted by christopher at 08:48

I love these old photos! Buses, trains, ships - they all have the same charm.

Glad to see a few ladies enjoy my world of transport too. You are right transport in the past might have been slower and colder but it had far more charm charisma and personality.
Thanks for your comment Helena.