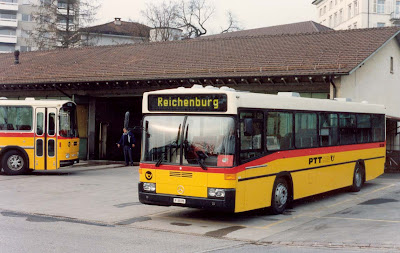 Most PTT garage bus allocations were fairly standardised especially the smaller ones but Uznach was an exception with in September 1992 a very mixed fleet of about thirteen that included Mercedes 405's, Saurer RH, NAW BH2, NAW BH4, MAN SM11 Saurer DUK buses plus a seven-seater Land Rover with a snow plough. The building itself though with the cream painted glass windows was typical of the older premises. That could be frustrating should one come when there was nobody about but in certain instances such as Scoul and Sion each stall had it's own bus and the number was most helpfully written on the obscuring glass. Many times coming on a Sunday I've tried looking through cracks and key-holes trying to identify my quarry. New in 1992 P25370 preparing to go to Reichenburg was one of a pair of O405's along with P25371 whilst the Saurer I think was P24222 at this time also one of two along with P24210 both dating from 1979.
Posted by christopher at 08:55