Southdown Coaches: Before Shearings was King of the Road: 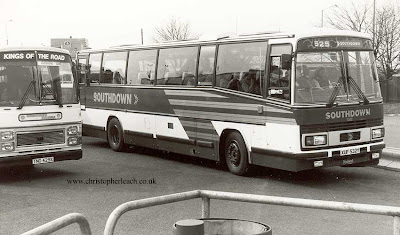 Southdown was always associated with Leyland coaches and that tradition continued through the NBC era. At fist they were painted in that all-inclusive boring white but as time went on more local colours were added to the various operator's improving the image considerably. Even as this spotless Plaxton 3500 bodied Leyland Tiger shows this much esteemed fine Sussex operator was still something to be reckoned with. However who would have thought that Shearings Pleasureways whose fleet included slow noisy lightweight tin-can R1114-5 Fords really would one day actually be what seemed like a joke calling themselves 'Kings of the Road'. But that has come to pass for they are now by far the driving force in what's left of the UK coach tour industry even through a formality swallowing up the likes of Wallace Arnold. I first thought this was a Ford too but as TND 431X was a Volvo B10M with similar Plaxton Supreme bodywork I guess this one No.429 might well be the same. The shot was taken in the mid-Eightes on the M1 Motorway probably at Toddington Service Area.
Posted by christopher at 05:30