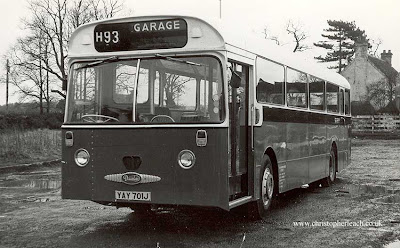 Mid-Warwickshire was one of those concerns that wasn't with us for long, less than ten years in fact, but unlike many others that quickly came and went later following the green shoots of deregulation this firm was quite memorable as not only did it come at a time in the Seventies when new bus operators of any interest entering the market were not so common it ran an interesting fleet of buses and coaches in an area to the South East of Birmingham based near Meridan a village reputed to be at the centre of England. Also of interest was that when it started running it's first a Meridan to Solinull service in 1973 it had the honour of being the sole Independent Company running a bus route in the West Midlands County, something that is hard to imagine today. As well as at Water Orton nearby one could usually find a number of buses parked on the large muddy and pot-holed parking area at the side of the Lincoln Farm Transport Cafe including this one, one of it's best know vehicles a rare 36ft-long Willowbrook bodied Daimler Fleetline single-decker that came from the Road Transport Training Board a non-p.s.v. operator. The fleet included some of the very late examples of the AEC Reliance coach as well these older buses. Altogether there were about about thirty vehicles and the livery was maroon and black or maroon and dark blue.
Posted by christopher at 07:33