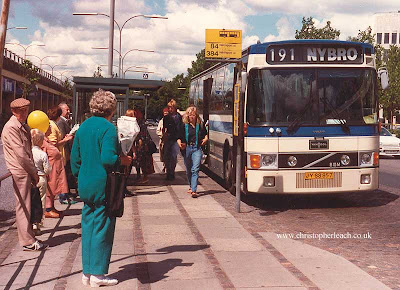 Although the Copenhagan operator HT was responsible for running the buses in the three city zones many of the middle and outer area services were still worked by their former companies under licence. A good example was the Da Bla Omnibusser of Holte which in 1989 was working the hour-long 191 from the busy interchange at Lyngby to Holte. However many short journeys though like this one to Nybrogard worked by a Van-Hool bodied Volvo B10M would take less than ten minutes.
Posted by christopher at 08:31