To the rescue: Kelvin Scottish 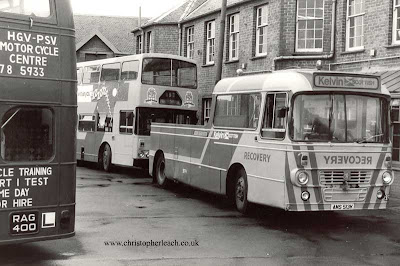 This cut down Alexander Y-Type bodied Leyland Leopard made a very stylish breakdown-tender for Kelvin Scottish. No doubt this scene will make sense to local enthusiasts as there were a lot of changes within the Scottish Bus Group in the Eighties but I'm pretty sure it was taken at one of Central's garages like Motherwell to the south of Glasgow where the failed Alexander R-bodied Metrobus was being collected from. The old trainer is a Bristol LD6G Lodekka of 1961 that started life as Western Scottish No.1634.
Posted by christopher at 14:34