Climbing out of Barry 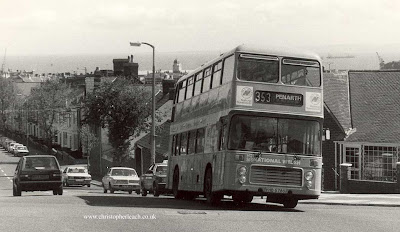 Barry is not far from Cardiff on the Welsh side of the Bristol Channel and before the advent of the National Bus Company was home to about fifty Western Welsh buses, but by the end of the Eighties this once very BET Leyland and AEC dominated little corner of the now NBC National Welsh territory had become far more like it's other main constituent Red and White operating many ECW bodied Bristol VR's and using that operator's former numbering system like this bus H (Highbridge) R (Rear-Engined) 818, and no doubt making a lot of noise as it climbed out of Barry in the sunshine on it's short journey way to Penarth just along the coast.
Posted by christopher at 01:13