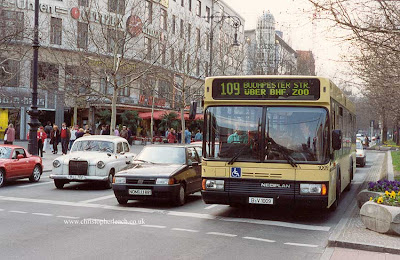 In 1992 Berlin's BVG bought ten Neoplan N4014 single-deckers 1001-1010 and put them to work on the prestigious 109 route from the central Zoo area out to Tegal Airport. Later they found themselves relegated to suburban services in the East where they joined most of the other Neoplans including some three axle single-deckers N4021 Nos 2501-2518 working from the large bus cum tram depot at Lichtenburgerstr. Of interest as well as a Fifties Mercedes car in this early Spring Kurfirstendam scene are the colourful Guardian Angels who patrolled the streets and subways at that time. Whether they made the streets safer I'm not so sure, but it certainly made the place seem a bit like an American import.
Posted by christopher at 09:03