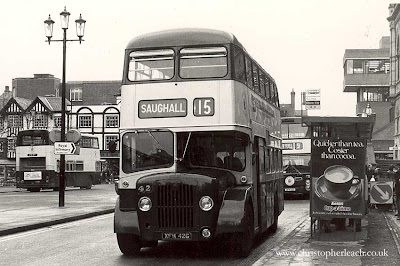 A fond look back to Chester City Transport whose very traditional smart dark maroon almost brown half-cab Guy Arab buses once graced this historic city with their charm. Captured on film in the early Eighties it looks as though this Northern Counties bodied bus had just come out of the paint-shop ready for hopefully it's last couple of years. Very typical of the fleet were also Daimler Fleetlines with the same make of bodywork to be followed by more of the same on the later Dennis Dominator chassis.
Posted by christopher at 03:18