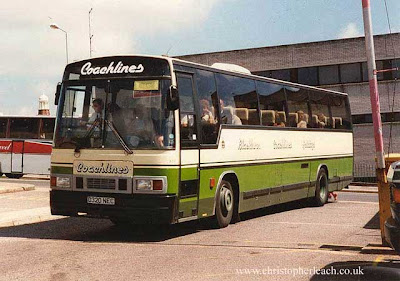 With the break up of the National Bus Company leading to many of it's members shedding their coach fleets other operators that one wouldn't consider coach operators built up their own fleets or started operating them from scratch as everybody wanted a share of the goodies and nobody could predict exactly how the bus market would go. One of the best known newcomers with municipal coach units was Blackburn Coachways whose vehicles wore similar colours to the bus fleet at home. No.320 a plaxton 3500 bodied Leyland Tiger was seen entering Exeter Paris Street Bus Station in the early Nineties on a West Country tour.
Posted by christopher at 09:10