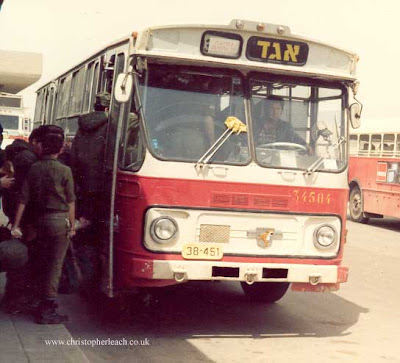 Rather in the same way that in Britain sunglasses are more of a fashion item than of any practical use in other hotter parts of the world where they seem to have nothing else even windscreen wipers are there more as a prayer than anything else. Joking apart it is not a good idea to run for too long without wipers and I'm certain unless they were buying them from British Leyland in the Seventies there would not be a long waiting list. Although this view was taken during one of Israels more peaceful periods as usual army personnel are ever present travelling about on the buses including this well used Dutch lantern-screen Leyland Royal Tiger
Posted by christopher at 23:57

This is a nice photo from a Den Oudsten coachwork that was specially designed for Israel, based upon the Dutch standard bus. Getting windscreen wipers from Den Oudsten should not have been the problem in those days. With 5500 standard buses running over the years we probably had millions of those at the spare parts department.