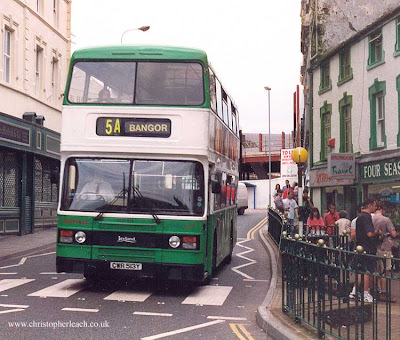 It took a while for me to get used to the Crosville Wales livery but at least it stood out a bit from the rest and was not too dissimilar to the Arriva aquamarine and sand colours which followed. This former ECW bodied West Riding Leyland Olympian DOG 513 was working one of the more profitable routes to Bangor in 1998. In that year there were still five of these buses allocated to the garage there where the other double-deckers, the fast dwindling VR still managed to outnumber them with nine examples.
Posted by christopher at 05:45