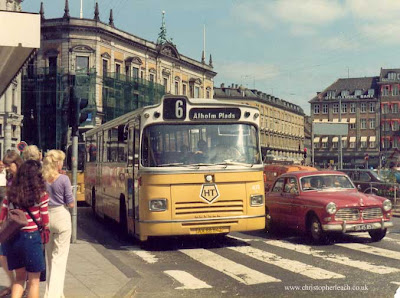 I'm glad to see that I am now able to welcome a few Swedish bus enthusiasts to my Bus World Blog and even though I don't have a huge stack of photos from there, now that we're in 2008 they have reached that certain age that makes them interesting. I have quite a few more but as my regulars know I like to slowly trickle them through so you wont go away. Far more numerous items at home though are my views from Denmark as I spent a lot of time in the 80's visiting towns and photographing the buses in all those often striking traditional liveries. So here are two more Scandinavian favourites, a red Volvo Amazon (a girlfriend's father had one in the Sixties) and one of my most favourite HT types the Leyland-DAB with the large route-number box. BL2d No.475 was new in April 1970 allocated to Valby and seen in 1982.
Posted by christopher at 23:30