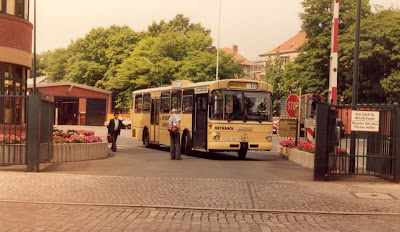 In the Eighties BVG in Berlin experimented with methanol as an alternative fuel on this 1982 Mercedes and No.1387 carried the message on it's sides. When still quite new the bus is about to leave one of the smaller garages with about 120 buses at Lichterfeld. Sadly with cut-backs it was closed several years later which was a pity as it was both modern and quite attractive.
Posted by christopher at 03:23