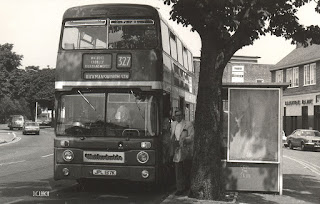 It had more than it's fair share of Leyland Nationals but London Country was definately one of the most interesting NBC fleets and at least a lot of it's elderly RT's were replaced with these attractively bodied Atlanteans by Park Royal instead of Bristol VR's. This is one of those quick jump out of cab and grab a photo shots of AN37 so I can't remember exactly where it was but not too far from Croxley.  Some nice detail here though including a yellow Commer telephones van and I wonder if that handy looking branch of Lloyds Banks is still there, I doubt it!
Posted by christopher at 16:43

Chris The location is Garston, the bank you refer to is on Garston Park Parade and the bus garage is behind the AN. You can just see the admin block at the side of the bus roof. I lived in Garston for 27 years. Cannot say if the bank is still tehre as I have not been back since 2006.

Thanks Alan, yes I would have stopped off there for a quick peep if I was going passed.